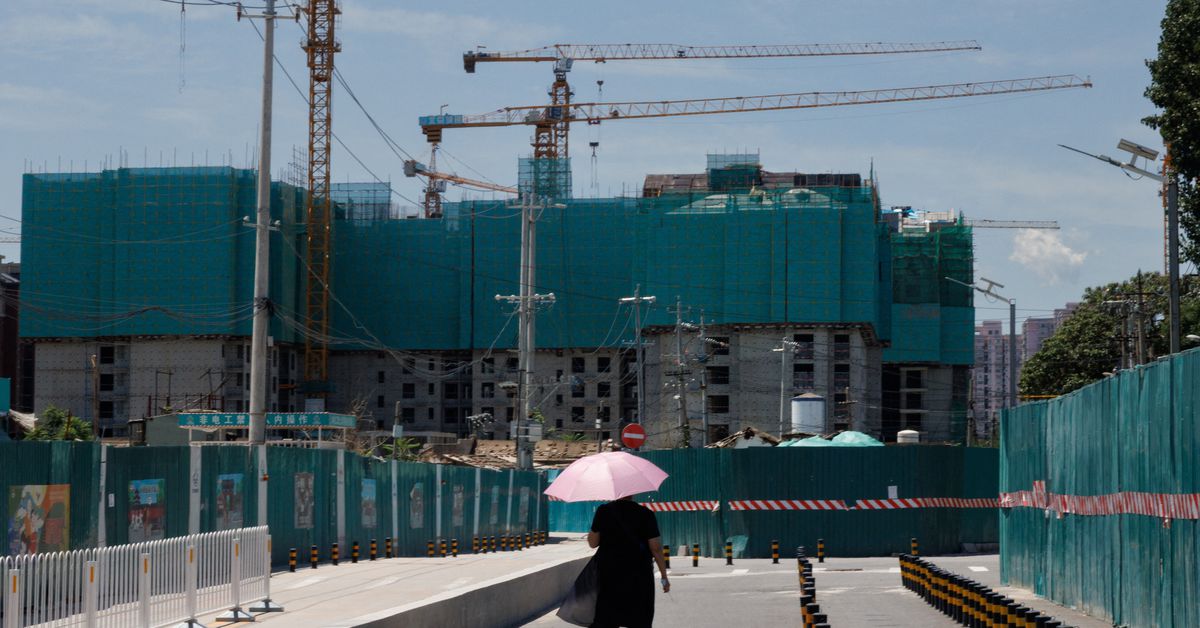 A woman walks near a construction site of apartment buildings in Beijing, China July 15, 2022. REUTERS/Thomas Peter

The CBIRC said it believes that with concerted efforts, “all difficulties and problems will be properly resolved”, reported the China Banking and Insurance News.

The remarks come as a growing number of homebuyers across China threatened to stop paying their mortgages for stalled real estate projects, deepening a real estate crisis that has already hit the economy. Read more

The latest news has helped banking and real estate stocks recoup some of their recent losses. China’s banking index (.CSI399986), which fell 7% to a more than two-year low last week, rebounded 1.4% on Monday. Chinese real estate stocks (.CSI931775) gained 3.1% on the mainland and jumped 3.7% in Hong Kong (.HSMPI).

The rebound in Chinese banking stocks was also aided by news that China will accelerate the issuance of special local government bonds to help supplement the capital of smaller banks, as part of efforts to reduce risk in the sector. Read more

The report adds that the eligibility of homeowners and the length of grace periods would be decided by local governments and banks, and that the yet-to-be-finalized proposal from financial regulators would require the approval of China’s senior leaders.

Official data on Friday showed output in the housing sector fell 7% in the second quarter from a year earlier, marking the fourth consecutive quarter of decline.

New home loans in June were expected at more than 150 billion yuan ($22.23 billion), down from a contraction in May, state broadcaster CCTV reported on Monday.

“I think the Chinese government has the will and the wherewithal to address the issue, and will likely take swift action,” said Mark Dong, co-founder and managing director of Hong Kong-based Minority Asset Management.

“The biggest risk is weakening consumer confidence, which threatens the nascent recovery in property sales.”

The CBIRC pledged last Thursday to strengthen its coordination with other regulators to “guarantee the delivery of housing”. Read more

Already more than 200 projects have been affected by the mortgage boycott by home buyers across the country, and at least 80 property developers are affected so far, E-house China Research and Development Institution said in a report. published on Monday.

E-house estimates stalled real estate projects across China involve 900 billion yuan in mortgages in the first half, or 1.7% of total outstanding mortgages.

In Sunday’s interview, the CBIRC urged banks to “assume their social responsibility” and actively participate in considering plans to bridge the financing gap and support property project acquisitions.

The regulator hoped the moves would help stabilize the property market by allowing stalled property construction to resume quickly and houses to be delivered to buyers early.

Studies find states, cities and car brands with the safest and worst drivers