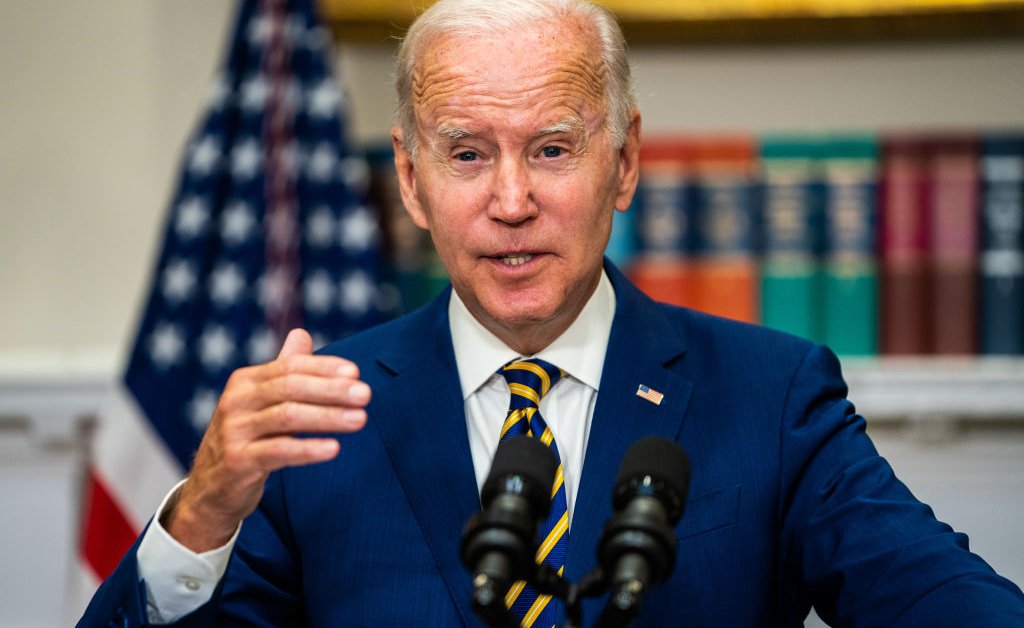 JTo find the power to cancel billions of dollars in student loans, President Biden turned to two words in a 2003 law: “national emergency.”

President George W. Bush had troops in Afghanistan and Iraq when Congress passed the Higher Education Student Aid Opportunities Act of 2003. The bill, also known as the HEROES Act of 2003, gives the Secretary of Education the power to change student financial aid programs during war, military operations or “national emergencies.”

This reasoning is almost certain to be challenged in court. But who can legally challenge the order is unclear. As soon as Biden announced his order, various conservative legal groups began exploring who would have the right to sue, which would require proving they would be harmed by Biden’s order. One possibility: The House could pursue the order next year, if Republicans win enough seats to take control in the fall.

“It’s on shaky legal ground at best,” says Lanae Erickson, senior vice president for social policy, education and politics at Third Way, a Washington think tank that seeks nonpartisan policy solutions. Erickson worries that Biden’s action may go too far in its reliance on the national emergency of the pandemic and that the courts will determine that such a move requires congressional action. “The connection to the pandemic is quite exaggerated, I think.”

Biden’s order followed his campaign pledge to take action to help some of the 44 million Americans with a collective $1.7 trillion education debt hanging over their heads. Just after taking office last year, Biden himself said he wasn’t sure he could use executive action alone to write off much of the student debt. “I don’t think I have the authority to do that by signing with a pen,” he said in February 2021.

But since announcing the loan debt forgiveness actions, the administration has dismissed doubts about its authority to make such a move. The HEROES Act, White House press secretary Karine Jean-Pierre said Aug. 25, “authorizes the Secretary of Education to take such actions as he deems necessary to ensure that a borrower is not not placed in a more difficult financial situation due to a national emergency such as the COVID-19 pandemic.

The federal government temporarily suspended student loan repayments at the start of the pandemic. Biden announced last week that the suspension would end on December 31. The loan cancellation plan is expected to take effect the next day.

“Part of what legal authority is being used to do here, in a targeted way, is to make sure that the borrowers who are at the greatest risk of post-restart distress occur, those are the people who are going to get the relief,” says Bharat Ramamurti, the deputy director of Biden’s National Economic Council.

Since Biden announced the order on Aug. 24, legal groups and experts have speculated about who might have standing to challenge it. Companies that service student loans may attempt to prove that they have been wronged. A person who earns an income just above the $125,000 threshold for the rebate could potentially claim standing.

Or one of the houses of Congress could try to sue the Biden administration, arguing that Biden’s loan action impinges on Congress’s power over the nation’s finances. But such a move could only happen if Republicans win enough seats to take control of the House or Senate.

Such a suit would not be unprecedented. In 2014, the Republican-controlled House voted to sue the Obama administration on its enforcement of the Affordable Care Act. Although House Republicans ultimately won standing to sue, that lawsuit ended up having little effect on the implementation of the law. In 2019, House Democrats sued the Trump administration for spending on building a border wall.

Legal groups are closely studying the 25 pages opinion the Justice Department’s office of legal counsel released last week telling Biden he had the authority to reduce or cancel student loan principal balances for a broad class of borrowers to deal with hardship financial consequences resulting from the pandemic.

“I would expect there to be challenges – it’s such a slap in the face for anyone who did what they were supposed to do,” says Reed Rubinstein, director of oversight and investigations at the America First Legal Foundation, which was founded by Stephen Miller, former senior adviser to former President Donald Trump.

Rubinstein says it’s too soon to know whether his organization, which has challenged several Biden administration policies over the past year, would get involved in challenging the loan forgiveness. He thought Congress would have standing to sue to protect its institutional interests from the power of the wallet.

Rubinstein was an attorney working at the Department of Education during the Trump administration. He says he wrote a memo in January 2021 about loan forgiveness limits that Biden’s Justice Department rejected. “The Biden administration and Democrats have had multiple opportunities to address what they perceive to be inequities in the system or issues with the system, the right way to pass legislation in Congress, and they don’t haven’t done,” Rubinstein said. “In this context, it certainly looks like a pretty naked political giveaway to a favorite constituency.”

The Job Creators Network Foundation Legal Action Fund, which successfully sued the Biden administration in 2021 over vaccine warrants on behalf of small business owners, is “actively weighing its legal options,” the president and CEO said. Alfredo Ortiz in a statement.

“A bailout of student loans will further exacerbate inflation, increase the deficit and lead to higher taxes,” Ortiz continues. “It’s not fair to the countless number of Americans who have paid off their college loans or who never went to college and it doesn’t address the root causes of why college loans have become so dear.”

A Supreme Court decision last month involving the so-called major issues doctrine, which says agencies cannot make decisions of national importance without input from Congress, has fueled debate over the legality of the order. Biden. The judges ruled that the Environmental Protection Agency had gone too far in regulating emissions from coal and natural gas plants, determining that such sweeping measures required Congress to pass a law. Erickson thinks Biden’s student loan action will face a similar rebuke.