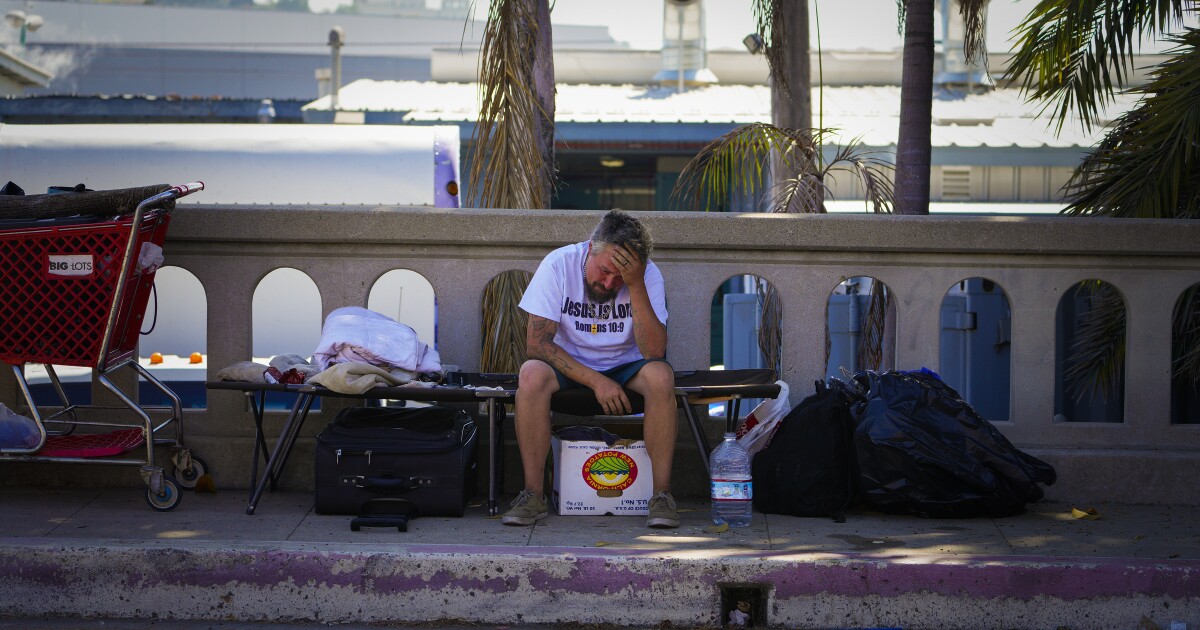 As police cracked down on people living in motorhomes, vans and cars with expired registrations last week, many of the vehicle’s occupants said they would have parked in one of the city’s parking lots for the homeless if only it were open 24 hours a day.

They could get their wish in a few months.

San Diego funds three secure parking lots, the term for parking lots for homeless people who live in vehicles, and the Mission Valley location on Mission Village Drive was the only one that allowed RVs. The total cost of the three batches in the new fiscal year will be $1.4 million, including $444,000 from the CARES Act Community Development Block Grant funds for extended hours.

In an unrelated move, Vista City Council on Tuesday discussed creating a secure 25-space parking lot in their city. It would be the second in North County, with an Encinitas batch already in operation.

The Mission Valley lot opened in June 2019, and it soon became apparent that RV locals were avoiding the lot. An official with the Jewish Family Service of San Diego, which operates the city’s three secure parking lots, said at the time that only three RVs had used it in the first two weeks.

Jewish Family Service chief of staff Chris Olsen said last week that the lot averages 70 vehicles, including just eight motorhomes. The number of recreational vehicles increases to about 17 during the winter, he said.

RV locals said they didn’t like the parking lot as they had to go out every day at 7am and couldn’t come back until 6pm. in violation of the city’s oversized vehicle ordinance prohibiting motorhomes from parking on public roads from 2 a.m. to 6 a.m.

On Monday, members of the San Diego City Council heard highlights of a two-year study of the three lots conducted by UC San Diego’s Department of Urban Studies and Planning.

Stacey Livingstone, a UC San Diego sociology doctoral student who worked on the study, told council members that 180 people were interviewed for the study and that it was overwhelmingly clear that parking 24 hour security was desired.

Olsen said the conversion to 24-hour service will require the addition of more security guards and cases, and he expects the transition to be complete by the end of the summer.

For some RV dwellers and others living in vehicles, the transition can’t be quick enough.

The same week the city council voted to extend parking hours, the city began cracking down on encampments and oversized vehicles on Pacific Highway and Anna Avenue, which parallels the freeway in an industrial area. just north of the old town.

“They towed my bus?” said JP Palmar as he walked to where he had parked his 1969 Volkswagen Westfalia van on Wednesday morning. “But there were handicap plates on it!”

Palmer said he was away that morning working on an RV he parks near SeaWorld, but others on Anna Avenue told him they saw his van being towed away. He was furious and didn’t want to talk much, but before returning to his motorhome he said he was 87 and had been homeless for eight years.

An officer on the street that morning said about four vehicles had been towed, but none would be towed if their owners were present.

It’s not always the case.

Eric Barber, 36, was sitting on a cot on the side of Anna Avenue and recalled one night two weeks ago when he and his wife pulled into a parking lot at Dana Landing. An officer noticed expired tags on their 1995 Mercury Villager pickup truck and approached the couple.

Barber said they were told to get out and the van was towed to an impound lot.

“It’s too much money,” he said of the $700 impound fee, which was about what he paid for the van. Barber estimates the cost last week had risen to $1,000, with more costs to follow if he had to take it to a garage for repairs to pass a smog test.

He knew of the city’s safe grounds, but said his wife never wanted to go there.

Jerrod Starbird, 48, has been homeless for two years and was living until Wednesday in a trailer attached to a 1981 Chevy Titan motorhome parked on Anna Avenue.

“I’m very worried about being towed away,” he said as he prepared to leave after receiving a ticket for an expired registration. Although it was not towed that morning, it had been given 72 hours’ notice to leave the street.

His car was towed a month ago and Starbird said he had just received a notice that it would be auctioned off if he did not pay $1,500 in impound fees. He estimates that the tickets in circulation would cost $1,500 more.

“I’d be fine in one of the parking lots, but I can’t get in because of my registration,” he said of the city’s secure parking lots.

Olsen, however, said there was a place for him in a Jewish family service package.

Leon Qiyam Pogue, a 65-year-old army veteran, lives in a Scion and a tent on Anna Avenue and said he watched a VW bus and a towed motorhome that morning,

“It’s people’s lives, man,” he said. “If they had taken this car or confiscated this tent, we would literally be on the street, my wife, me and my dog.

“I spoke to the officer and said, ‘Why are you destroying people’s lives?’ “, he continued. “And he said, ‘Listen, I have a job to do. I said, ‘Do you mind destroying someone’s life?’ It’s a bit heartless. These people are in trouble here. We do not commit crimes. We struggle.

Pogue said he would go to a safe parking lot if it was open 24 hours and he was free to come and go during the day, which he has to do twice a week to sell plasma for 120 $.

Maya Reynolds, 58, has been homeless for three years and owns a 2003 Mercedes SUV and a 1984 Dodge pickup truck on Anna Avenue. She said she lived in a trailer, but one day an officer approached her and forced her out so she could be impounded for expired registration.

She heard about safe parking lots, but didn’t want to go there.

“They don’t work,” she said. “Everyone has to leave at 7am. I would go to their place if they were open 24 hours a day.”

The UC San Diego study found that most households served by secure parking programs are adult-only, but 20% are families with children.

Nearly 70% of participants said they were homeless for the first time and about 44% had been homeless for only one month.

Between February 1, 2019 and November 30, 2020, the UC San Diego study found that approximately 18% of clients left the program for permanent or temporary housing. The report says that figure is likely low, as they had no exit information for almost 60% of people who left.

Over a six-month period, almost a third were released for permanent or temporary housing, including shelters, according to the study.