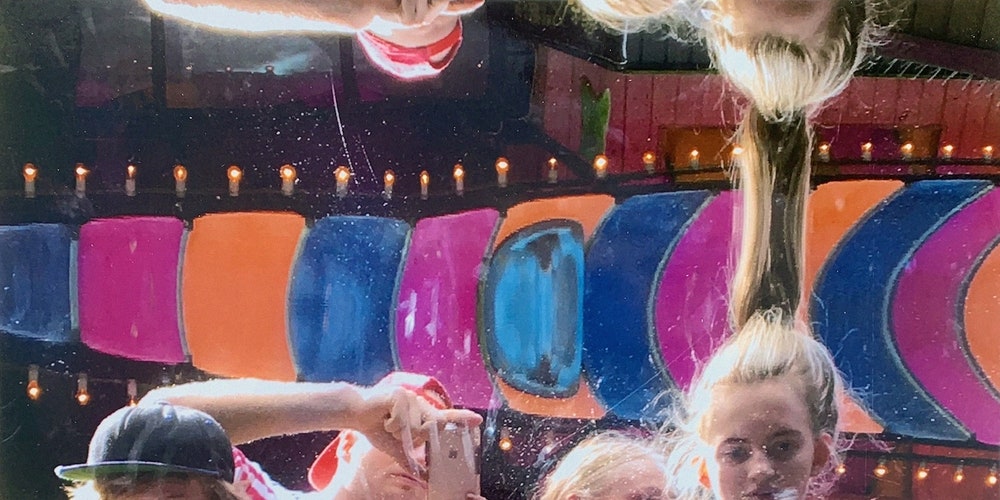 Three or four years ago, Copenhagen became known for a particularly fast variety of dance music. Its frantic battery programming packed a punch of industrial strength; its glistening synths channel the ’90s trance. Most people would simply call it “fast techno,” though that curtly utilitarian term doesn’t capture the eye-opening psychedelic aura of the style. Kasper Marott is no stranger to fast tempos and he released on Kulør, a Copenhagen label at the heart of sound development. But Marott does not share the ferocity of some of his peers. His 2018 single “Keflavik” filtered the pogo grooves of the stage through the rubbery shtick of vintage Italo nightclub funhouse, scribbling a dizzying grin instead of the clenched-jawed grin of fast techno. And on his single “Drommen om Ø (Forever Mix ’19) 2019 de Kulør”, he changed things up completely, slowing down the tempo and plunging into 14 minutes of eerie, weightless bliss – pink as a sunset, wet as a tropical forest, spongy like a water bed.

At Full circle, his first album, Marott continues to fight against techno orthodoxy from several angles. It tackles a wider range of tempos, styles and moods than ever before: woozy slow-motion jams, pensive ambient skits, thrilling breakbeat trance. The common threads are ultra-vivid sound design, oversaturated colors, and a subtle sense of humor. There is nothing wacky about these songs, but they are distinguished by lightness of mind and trickster instincts. Several times in the middle of “Missing Link”, a thunderous drum’n’bass tune, the rhythm stops. Marrott usually fills those breaks with squiggles of electronic noise, but the last time it happens he simply cuts the silence for 11 long seconds – which must seem like forever to the surprised DJ, rushing to find the next track, who thinks. that the song ended prematurely.

Outstanding tracks take the ball of fast technology and run with it. “Mister. Smiley” opens the album with a sweet dawn of softly wobbling synths, but once the beat kicks in there’s no hiding the song’s fervor at rush hour. The overactive drums and bassline emphasize the downbeats, lending the groove a jittery, hiccuping energy, which only breaks loose over the course of its nine minutes of running. But despite the intensity going all the way up to 11, “Mr. Smiley” has a hypnotic grace that is lacking in many equally complete club tracks. For all its caricatural strength, there is a great deal of subtlety in the mix and just as much surprise in the arrangement, which finds a clear dichotomy between the rolling groove below – deep, incessant, steady like your heartbeat – and the synths and dives unpredictably through the upper register, chuckling like disturbed birds.

Several tracks undermine a similar territory. “Mini Trance” marries the warm Detroit synths to a stiff, stomping beat and flesh out the space around them with shimmering metallic accents; the “Sol”, the highlight of the album, bathed in sunshine, applies the same approach to a house breakbeat foundation, surging then falling back into ocean waves. Among these uptempo pieces, only “Kun for mig” (“Just for me”) is envious; like his companions, he aims for a sort of inflated catharsis, but the rhythm and bassline fail to take off.

Some of the most unexpected moments on the record happen when Marott drops the high BPMs. “Mere” offers a weird version of the British garage, with a stumbling pace that feels even slower than it actually is; like “Mr. Smiley,” it makes the most of the contrast – in this case, between the crispness of the drums and the gloopiness of the beeps above. “Hvad er det” (“What is this” ) layers ambient textures over the kind of slow-motion groove once common among ’90s bands like Soul II Soul and Ace of Base, then throws a wrench in the works by looping a misshapen breakbeat into a weird time signature. “Top Soap ”and“ Pling ”both use marimba to evoke warm tropical atmospheres – the former to a crisp dembow rhythm and the latter to rippling triplet patterns reminiscent of classic minimalism. The fact that many of these songs last only two or three minutes does not diminish their impact. These shorter, more sketch-like pieces complement Marott’s trance-inducing epics well; their understated nature makes his hymns even more powerful.

As a genre, fast-paced techno doesn’t seem to have suffered much during the pandemic; Mainstays of the stage like Ibon, Rune Bagge, Funeral Future, and Repro continued to push quivering needles into the red. Yet the style remains inextricably linked with the nightlife experience, and as the pandemic continues and clubs remain closed, the whole raison d’être of club music becomes more and more noticeable. Divorced from the functional demands of moving bodies, what is dance music for? Full circle offers a number of possible answers, stimulating the imagination as much as the members. It is music to dance but also music to dream and, above all, music to stimulate dreams of a time when we can dance again.

Catch up every Saturday with 10 of our top rated albums of the week. Sign up for the 10 to Hear newsletter here.