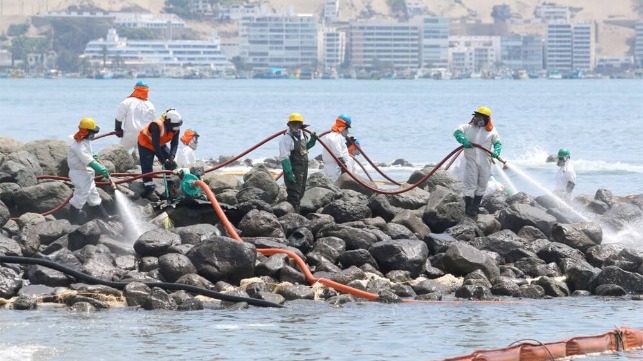 
Peru has again filed a civil suit against Repsol and others for liability in the January 2022 oil spill off its coast, asking the court for a total of $4.5 billion in compensation in what it calls the first civil action for liability in the case. This lawsuit is specifically aimed at compensating affected consumers, users and third parties and is separate from the criminal charges authorities were considering against the managers of the Repsol La Pampilla refinery complex. Repsol immediately responded by calling the case baseless liability, citing its ongoing cleanup efforts since a tanker spilled oil at the company’s refinery.

The executive president of the Instituto Nacional de Defensa de la Competencia y de la Protección de la Propiedad Intelectual (Indecopi), Julián Fernando Palacín Gutiérrez, announced the filing of the case on May 13 in the 27th Civil Court of the Superior Court of Justice of Lima. He said it was based on the damage suffered by more than 700,000 people in the region as well as the environmental impact on coastal areas, beaches, fishing activities, tourism and commercial activities, including more than 20 spas located in affected areas. such as resorts, restaurants and other businesses that depend on tourism in the region.

Indecopi noted that it was presenting an abstract valuation and that the court would set the final amounts based on the evidence. It seeks $3 billion for direct damages and an additional $1.5 billion for damages on behalf of consumers, users and third parties affected by the spill. In addition to Repsol, the insurance company Mapfre is named along with the La Pampilla refinery, the maritime agency Transtotal Maritime and Fratelli d’amico Armatori as operators of the tanker,


The case stems from an incident on January 15, 2022 when the tanker Doricum mare spilled approximately 6,000 barrels of crude oil during an offshore offloading operation. Respol says the tanker was hit by unusually high waves caused by a volcanic eruption on the island of Tonga and a resulting tsunami. Reports say 28 beaches across 75 nautical miles of coastline have been affected.

Repsol responded in a statement calling the complaint “unfounded, inadmissible and incongruous as it does not address the causes of the spill”. They went on to say that it also does not address the cleaning and sanitation work already completed by Repsol, nor the care channels the company has put in place for those affected, thanks to the collaboration with the Peruvian government. Commenting on the dollar amount quoted by Indecopi, Repsol said that “their estimates lack the slightest basis to back up the figures given.”

Repsol further claims that it has used all the means at its disposal to contain, clean up and repair the coastline and help the communities in the area. More than 2,900 workers were assigned to the cleanup, deployed up to 11,000 meters of containment barriers, using 144 units of heavy machinery, nearly 90 boats and 68 skimmers. Additionally, the company cites efforts that identified more than 5,500 people affected by the spill who received initial compensation of nearly $7.7 million.

Indecopi issued a follow-up to Repsol’s response saying there is no legal basis to discuss the role of the Doricum mare, clean-up tasks or emergency economic relief, as the case is solely about liability to affected residents and businesses who suffered loss as a result of the oil spill. “This situation has hit the economy of people and markets, whose economic life revolves around beach businesses, fishing, tourism, catering, commerce, leisure, among others,” Julián Palacín said. Gutierrez.

In January, less than two weeks after the spill, prosecutors in Lima asked Peruvian courts to ban four officials from the La Pampilla refinery complex from leaving the country. They said they were considering criminal prosecution as an initial fine of $5 million was imposed on the company. The Interior Ministry said that in addition to fines, Repsol could face a minimum of $500 million in debt as compensation for the effects of the spill.